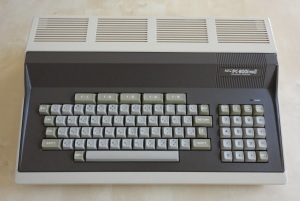 This is my NEC PC-8001 mkII. This is an early Japanese PC (1982) and it is the updated version of the pioneer PC-8001 (from 1979!). This is just an awesome machine, very powerful for its time. It runs a µPD 780C-1 (Z80 Compatible) clocking 4Mhz. It has 64Kb RAM which is pretty awesome for 1982 (MSX computers would still be produced with 16Kb a couple of years later). More impressive yet, it displays graphic resolutions of 320×200 (8 Colors) or 640×200 monochrome. The system supports a mono composite and a color RGB connection. I was able to find cables for both, but the color connection requires a older RGb monitor or a converter (the one I used for the Archimedes worked fine).

Unfortunately, not a lot of software was produced for the 8001 in general. Other models on the NEC series canibalized the 8001 market by being cheaper (6001) or just more powerfull (8801). It also had some pretty tough competition from the FM-7 and many others. Games are hard to find even in Japan and the few available don’t usually explore the mkII features (most keep compatibility with the original 8001 which was much more limited).

Still, this is an awesome machine for the collector in me. It looks great, NEC Basic is fun to program and it is a pretty rare computer here in the US.